Independent-minded, incisive and committed to covering the news without bias, the Central Asia and South Caucasus Bulletin has been reporting on the region, which stretches from the Pamir Mountains to the Black Sea, since September 2010.

It is now published in two sections. The 4-page front section covers political, general and macroeconomic news and the 4-page Business News section covers business and the markets. On average it reports on around 40 – 45 stories per week, mainly supplied by correspondents in the region.

Now included with a subscription to The Bulletin is access to the enhanced version of breaking news newswire. And there is, of course, access to our fully searchable and fully tagged archive with over 10,000 stories. 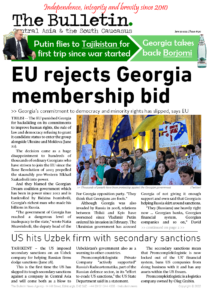 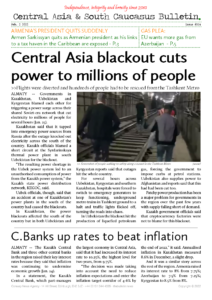 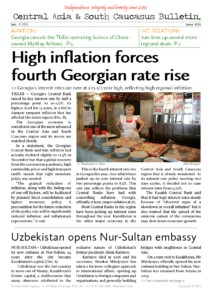 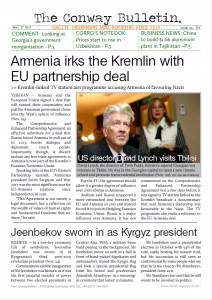 >>So, before we move on, why was The Bulletin previously called The Conway Bulletin?
The newspaper took its name and inspiration from Sir Martin Conway, a British writer, wood carver, politician mountaineer and explorer in the late 19th and early 20th centuries. He was a pioneer, a sort of late Great Game era renaissance-man, and it is this undaunted, pioneering spirit that The Bulletin aims to capture. We changed the name after nearly nine years to give our regional focus and expertise more prominence.

>What is The Bulletin and how does it cover Central Asia and the South Caucasus?

Headquartered in Edinburgh, The Bulletin was established in September 2010. It maintains correspondents in all eight countries of Central Asia and the South Caucasus. That’s Kazakhstan, Kyrgyzstan, Tajikistan, Turkmenistan, Uzbekistan, Azerbaijan, Georgia and Armenia.

>>So it clearly has a specialism, which is good, but what else does The Bulletin believe in?
Central to The Bulletin is its vision of journalism and treatment of the news. The Bulletin aims to provide unbiased, independent relevant and easily digestible coverage of Central Asia and the South Caucasus.

This is summed up in The Bulletin’s motto: “Independence, integrity, brevity”.

Of course, good journalism is irrelevant without context. Context underpins The Bulletin.

>>And who reads The Bulletin?
We have a diverse group of readers which includes major global financial institutions, energy companies, law firms, interested individuals, embassies.

We also have an online searchable archive which will holds around 10,000 stories written by The Bulletin. The data in this archive is searchable via tags and gives a detailed potted history of issues across the region. Perfect for targeted searches. It is a serious privately-owned archive focused specifically on Central Asia and the South Caucasus. And it is also available to all our subscribers.

>>This all sounds good. Who is the editor?
The editor and publisher of The Bulletin is James Kilner. He has lived in and reported from the former Soviet Union since 2001. He’s been based in Kazakhstan as a correspondent twice, once from 2002-4 and again from 2011-12. Between 2006-9 James was based in Moscow.

James has reported from Central Asia and the South Caucasus for various mainstream and specialist newspapers and magazines. He was a staff correspondent with Reuters news agency from 2004-10 and Central Asia correspondent for the Daily Telegraph from 2011-12.

The Bulletin is owned by Cross Fell ltd, which is a registered company in England. It was incorporated on March 3 2011 and holds company number 7551151.

>>What are the contact details? I may want to get in touch on other issues.
Please do. You can email James at editor@thebulletin.news. He’s more than happy to give people free trials of The Bulletin.